On Unix-like operating systems, the grep command processes text line by line, and prints any lines which match a specified pattern.

This page covers the GNU/Linux version of grep.

Grep, which stands for "global regular expression print," is a powerful tool for matching a regular expression against text in a file, multiple files, or a stream of input. It searches for the PATTERN of text you specified on the command line, and outputs the results for you.

Let's say want to quickly locate the phrase "our products" in HTML files on your machine. Let's start by searching a single file. Here, our PATTERN is "our products" and our FILE is product-listing.html.

A single line was found containing our pattern, and grep outputs the entire matching line to the terminal. The line is longer than our terminal width so the text wraps around to the following lines, but this output corresponds to exactly one line in our FILE.

If we use the --color option, our successful matches will be highlighted for us:

It will be even more useful if we know where the matching line appears in our file. If we specify the -n option, grep will prefix each matching line with the line number:

Our matching line is prefixed with "18:" which tells us this corresponds to line 18 in our file.

What if "our products" appears at the beginning of a sentence, or appears in all uppercase? We can specify the -i option to perform a case-insensitive match:

Using the -i option, grep finds a match on line 23 as well.

If we have multiple files to search, we can search them all using a wildcard in our FILE name. Instead of specifying product-listing.html, we can use an asterisk ("*") and the .html extension. When the command is executed, the shell expands the asterisk to the name of any file it finds (in the current directory) which ends in ".html".

Notice that each line starts with the specific file where that match occurs.

We can extend our search to subdirectories and any files they contain using the -r option, which tells grep to perform its search recursively. Let's change our FILE name to an asterisk ("*"), so that it matches any file or directory name, and not only HTML files: 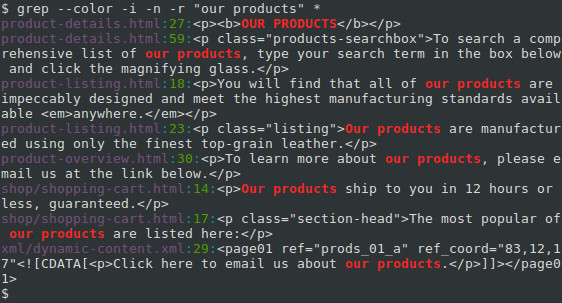 This gives us three additional matches. Notice that the directory name is included for any matching files that are not in the current directory.

The true power of grep is that it can match regular expressions. (That's what the "re" in "grep" stands for). Regular expressions use special characters in the PATTERN string to match a wider array of strings. Let's look at a simple example.

Let's say you want to find every occurrence of a phrase similar to "our products" in your HTML files, but the phrase should always start with "our" and end with "products". We can specify this PATTERN instead: "our.*products".

In regular expressions, the period (".") is interpreted as a single-character wildcard. It means "any character that appears in this place will match." The asterisk ("*") means "the preceding character, appearing zero or more times, will match." So the combination ".*" will match any number of any character. For instance, "our amazing products", "ours, the best-ever products", and even "ourproducts" will match. And because we're specifying the -i option, "OUR PRODUCTS" and "OuRpRoDuCtS will match as well. Let's run the command with this regular expression, and see what additional matches we can get:

Here, we also got a match from the phrase "our fine products".

Grep is a powerful tool to help you work with text files, and it gets even more powerful when you become comfortable using regular expressions.

grep searches the named input FILEs (or standard input if no files are named, or if a single dash ("-") is given as the file name) for lines containing a match to the given PATTERN. By default, grep prints the matching lines.

In older operating systems, egrep, fgrep and rgrep were distinct programs with their own executables. In modern systems, these special command names are shortcuts to grep with the appropriate flags enabled. They are functionally equivalent.

The period (.) matches any single character.

Within a bracket expression, a range expression consists of two characters separated by a hyphen. It matches any single character that sorts between the two characters, inclusive, using the locale's collating sequence and character set. For example, in the default C locale, [a-d] is equivalent to [abcd]. Many locales sort characters in dictionary order, and in these locales [a-d] is often not equivalent to [abcd]; it might be equivalent to [aBbCcDd], for example. To obtain the traditional interpretation of bracket expressions, you can use the C locale by setting the LC_ALL environment variable to the value C.

Finally, certain named classes of characters are predefined within bracket expressions, as follows. Their names are self explanatory, and they are [:alnum:], [:alpha:], [:cntrl:], [:digit:], [:graph:], [:lower:], [:print:], [:punct:], [:space:], [:upper:], and [:xdigit:]. For example, [[:alnum:]] means the character class of numbers and letters in the current locale. In the C locale and ASCII character set encoding, this is the same as [0-9A-Za-z]. (Note that the brackets in these class names are part of the symbolic names, and must be included in addition to the brackets delimiting the bracket expression.) Most metacharacters lose their special meaning inside bracket expressions. To include a literal ] place it first in the list. Similarly, to include a literal ^ place it anywhere but first. Finally, to include a literal -, place it last.

The caret ^ and the dollar sign $ are metacharacters that respectively match the empty string at the beginning and end of a line.

The backslash character and special expressions

A regular expression may be followed by one of several repetition operators:

Back references and subexpressions

The back-reference \n, where n is a single digit, matches the substring previously matched by the nth parenthesized subexpression of the regular expression.

Traditional versions of egrep did not support the { metacharacter, and some egrep implementations support \{ instead, so portable scripts should avoid { in grep -E patterns and should use [{] to match a literal {.

GNU grep -E attempts to support traditional usage by assuming that { is not special if it would be the start of an invalid interval specification. For example, the command grep -E '{1' searches for the two-character string {1 instead of reporting a syntax error in the regular expression. POSIX allows this behavior as an extension, but portable scripts should avoid it.

The behavior of grep is affected by the following environment variables.

The locale for category LC_foo is specified by examining the three environment variables LC_ALL, LC_foo, and LANG, in that order. The first of these variables that is set specifies the locale. For example, if LC_ALL is not set, but LC_MESSAGES is set to pt_BR, then the Brazilian Portuguese locale is used for the LC_MESSAGES category. The C locale is used if none of these environment variables are set, if the locale catalog is not installed, or if grep was not compiled with national language support (NLS).

Other variables of note:

If you haven't already seen our example usage section, we suggest reviewing that section first.

Search the Apache error_log file for any error entries that happened on May 31st at 3 A.M. By adding quotes around the string, this lets you place spaces in the grep search.

Recursively search the directory /www/, and all subdirectories, for any lines of any files which contain the string "computerhope".

Same as previous command, but displays a count of how many lines were matched, rather than the matching lines themselves.

Inverse of previous command: displays a count of the lines in myfile.txt which do not contain the word "hope".

Display the file names (but not the matching lines themselves) of any files in /www/ (but not its subdirectories) whose contents include the string "hope".