A walled garden may refer to any of the following: 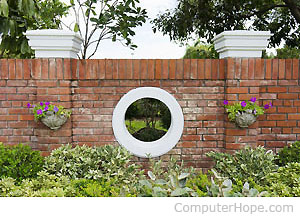 2. A walled garden is a term referring to a software suite or device where the services and information developers make available is only available to the software system or device's users. Many software company's use the walled garden model to promote specific products that they believe will significantly boost company revenue. For example, Apple has created its own culture under its company umbrella by offering many unique technological benefits only to users of Apple products. Many Apple products are still only compatible with other Apple products. Also, many of the popular iPhone apps running on Apple's iOS operating system are often exclusive to the App Marketplace. Companies like Apple use this method to encourage user loyalty to the brand. Exclusive content often gives users a sense of belonging and camaraderie with a company.