How to delete files in MS-DOS without a prompt 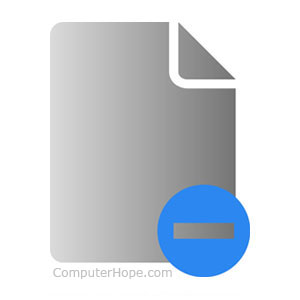 By default, MS-DOS and the Microsoft Windows command line will not prompt a user or give a user a prompt or warning when deleting files on a computer using the del command. However, when attempting to delete a directory using the del, deltree, or rmdir command, ensure that it isn't empty or you will receive a warning or error.

When deleting anything from MS-DOS or the Windows command line, it is not sent to the Recycle Bin.

To suppress prompting, use the deltree command with /y, as shown in the example below that deletes all files in the Windows temp directory.

The above command does not work in all versions of Windows and MS-DOS.

If this command does not work, we would recommend that you create a batch file with the following command in the batch file.

Users who want to delete a directory containing files in a Windows command line version 2000 or later can also use the rmdir or rd command with the /S option.

If you're running a later version of Microsoft Windows and using the Windows command line, you can also use the erase command to delete files without a prompt.