When was the first computer game released? 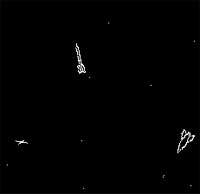 Although there are other earlier examples of computer games, most consider the first true computer video game or digital game to be "Spacewar!". This game was programmed and first played by Steve Russell, and released in February 1962. The game ran on the DEC PDP-1 computer, and consisted of two spaceships that maneuvered around a star that pulled at the ships with its gravity. The goal of the game was to avoid colliding with the star while trying to shoot the other ship with missiles.

The player controlled the game using control switches or a control box. They had the ability to rotate the ship clockwise or counterclockwise, provide the ship with thrust, fire missiles, and go to hyperspace. Below is an online version of this game that you can play through your browser.