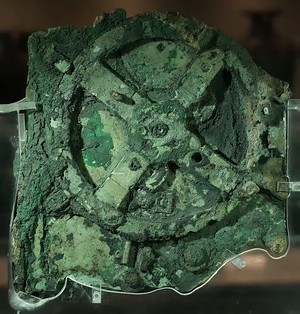 The Antikythera mechanism is an analogue computing device that performed astronomical calculations. It was constructed in ancient Greece sometime between 200 and 60 B.C. By some definitions, it's the world's first known computer. Pictured at right is the largest gear of the mechanism, on display at the National Archaeological Museum in Athens, Greece.

The remains of the mechanism were recovered from the shipwreck of a Greek vessel that sunk sometime between 75 and 50 BC. The wreck was discovered accidentally by divers in 1900 off the coast of Antikythera, a remote island south of Greece on the western edge of the Aegean Sea. In 1902, archaeologist Valerios Stais identified the bronze artifacts as containing gears that appeared to be part of a unified device.

In the years since Stais' discovery, extensive restoration and study of the device and its inscriptions was conducted. Archaeologists continue to study it today, trying to unlock its secrets. 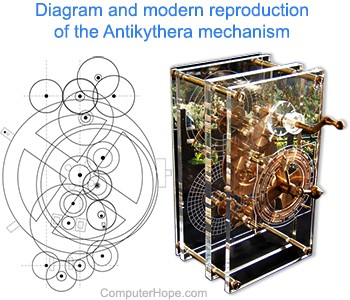 Scientists have determined that the mechanism was designed to calculate and predict the movements of the Sun and Moon. It comprised approximately 37 bronze gears of varying sizes, with the largest gear measuring approximately 5.5 inches and featuring 223 teeth.

Analysis of the device indicates that it could perform calculations with high precision, accounting for subtle accelerations and decelerations in the Moon's elliptical orbit. Among its other functions, it was able to predict solar and lunar eclipses, and report astronomical data related to the date of the next Olympic games.

Scientists believe that all information about the Antikythera mechanism was kept secret, or forgotten, after the decline of ancient Greece. No other evidence of a similar device exists for over a millennium, until the invention of the "Castle Clock" by Muslim polymath Ismail al-Jazari in 1206 AD.