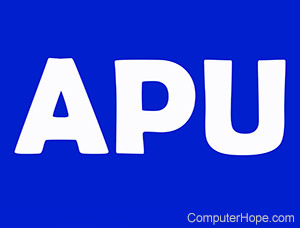 By offloading tasks that would be only performed by the CPU, computers that take advantage of APU can have a significant performance increase.

AMD's Piledriver core or Trinity chip is a good example of a chip designed as an APU. This chip integrates a CPU and a GPU on the same die, which increases data transfer and lowers power consumption. An APU can also be such things as accelerators and FPGA.