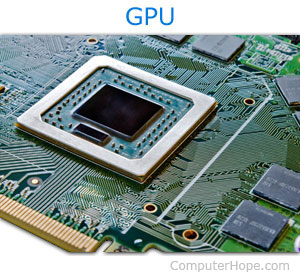 Short for graphics processing unit, GPU is an electronic circuit used to speed up the creation of both 2D and 3D images. GPUs can either be integrated, meaning they are built into the computer's CPU or motherboard, or dedicated, meaning they are a separate piece of hardware known as a video card. By having a separate processor, the GPU allows the computer's CPU resources to be used for other important tasks. In the picture, is an example of a GPU on a video card without the heat sink.