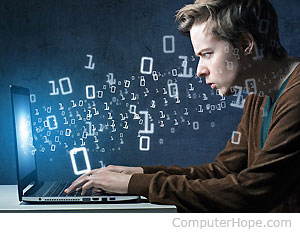 Pronounced see sharp, C# is a programming language based on C++ and Java developed by Microsoft. It was introduced to the public in June 2000 with the announcement of the .NET ("dot net") framework. In 2003, the C# language became an ISO standard.

Below is a basic example of printing "HelloWorld!" to the screen using the C# programming language.