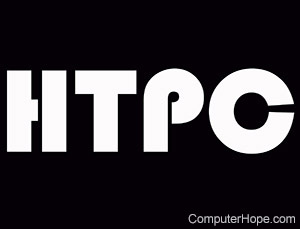 Short for home theater personal computer, an HTPC is a computer whose main purpose is to provide audio and video for entertainment. It is usually smaller and quieter than a standard desktop computer, and uses a high-capacity disk for storing media files. Depending on the application, some HTPCs use a special version of the Windows operating system to control the home theater features.

The original HTPC dates back to the late 1980s, where tuner cards were installed in the Commodore Amiga PC to play broadcast or cable content on their computer monitor. Since then, computers are built for all types of home theater capabilities, including acting as a DVR (digital video record) and a complete movie and music playback system. Microsoft created Windows XP Media Center edition in 2002 to be a complete home theater system on a computer and even included a remote control for easier access and control. Third-party vendors have created many applications that serve as a home theater control center for computers, as well, making it even easier and less costly to build an HTPC.