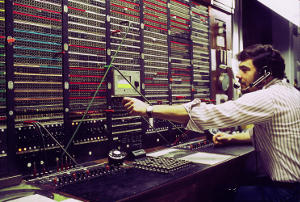 The 5ESS switch, also known as the number 5 electronic switching system, is a Class 5 telephone switching system originally developed by AT&T and Western Electric. It was developed by over 5000 employees and contains over 100 million lines of computer code. It was first deployed in Seneca, Illinois on March 25, 1982, and since then has undergone over 20 years of development. Today, approximately half of all telephone calls in the United States are routed through 5ESS switches.