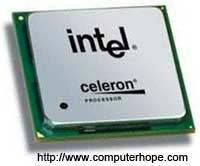 In early 1998, Intel was having a hard time selling the Pentium II, which at the time was expensive. Many users bought the AMD K6-233, which offered very good performance at a moderate price. Thus, Intel created a brand new CPU called the Celeron, which is similar to the Pentium II, but lacks L2 cache, the Pentium II shell, and uses a new Covington core. In 1998, Intel replaced their Pentium MMX with the Celeron. This inexpensive Celeron cartridge fits into Slot 1, and it runs at a 66 MHz system bus. The internal clock runs at 266 or 300 MHz and delivers very good performance for floating point and MMX heavy programs such as certain games. Concerning office applications, the lack of L2 cache is a great disadvantage.

Today, Celeron processors are available as dual-core, running at higher speeds, with more cache built directly into the core CPU. The addition of cache helps alleviate some of the cache issues that brought the original Celeron some very harsh reviews.

Celeron processors are a good alternative for users who don't mind a slight decrease in performance and have no intention of playing hardware intensive computer games or programs.