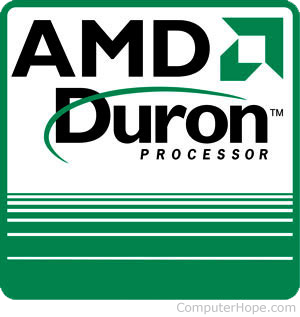 The Duron processor was manufactured and released by AMD on June 19, 2000. It was a lower cost processor, providing an alternative to AMD Athlon processors. It was also released as a competitor to Intel Celeron processor. AMD discontinued the Duron in 2004 and introduced a new processor as a replacement, called the Sempron.

The Duron processor was built on the x86 architecture and very similar to the Athlon processor, including the use of the same pin configuration. This allowed the Duron to work with many of the same motherboards as the Athlon. First generation Duron processors ranged from 600 MHz to 950 MHz, while second generation Durons ranged from 900 MHz to 1.3 GHz. Both featured a front-side bus speed of either 100 MHz or 133 MHz. The largest difference between the Duron and the Athlon was the size of the L2 cache, which was only 64 KB, whereas Athlon had 256 KB or 512 KB. However, the L1 cache on a Duron was 128 KB, which was one of the largest at the time.