Cache may refer to any of the following:

1. Pronounced like the physical form of money (cash), cache is a high-speed access area that's a reserved section of main memory or an area on the storage device. The two main types of cache are memory cache and disk cache.

Memory cache is a portion of the high-speed SRAM (static random access memory) and is effective because most programs access the same data or instructions repeatedly. By keeping as much of this information as possible in SRAM, the computer avoids accessing the slower DRAM, making the computer perform faster and more efficiently.

The cache can also be used as a scratch space to temporarily store information needed in a CPU operation.

Today, most computers come with L3 cache or L2 cache, while older computers included only L1 cache. Below is an example of the Intel i7 processor and its shared L3 cache. 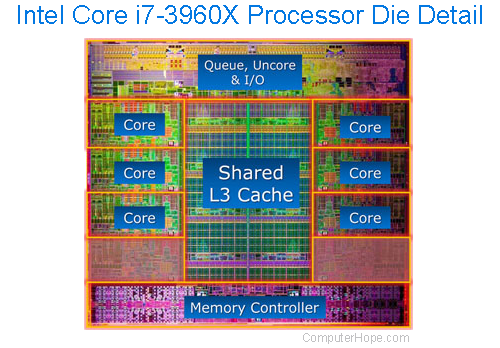 Cache was introduced when IBM announced additions to System/360 family, including the Model 85 in 1968. The high-speed cache, or buffer memory, found in the System/360 Model 85, is the first in the industry. The cache memory makes highly prioritized information available at 12 times the speed of regular, main-core memory.

2. With Internet browsers, cache is a temporary storage area where website data is stored. By caching this data, the web browser can improve performance by loading data from your disk, instead of the Internet, if it's ever needed again. In most cases, each time you open a web page, the page and all its files are sent to the browser's temporary cache on the hard drive. If the web page or its resources haven't changed since the last time you viewed it, the browser loads the data from cache rather than downloading the files again. Cache saves time, especially if you use a modem, and can also help save on bandwidth for the website owner.

Anyone concerned about their privacy or want to hide pages they have visited can clear their Internet cache. If you clear your Internet browser cache frequently, you may also want to consider using incognito mode.

3. Like memory caching, disk caching is used to access commonly accessed data. However, instead of using high-speed SRAM, a disk cache uses conventional main memory. The most recently accessed data from a disk is stored in a memory buffer. When a program needs to access data from the disk, it first checks the disk cache to see if the data is there. Disk caching can dramatically improve the performance of applications because accessing a byte of data in RAM can be thousands of times faster than accessing it on a hard drive.

4. A cache server is a computer or network device set up to store web pages that were accessed by users on a network. Any user trying to access a web page stored on the cache server is sent the stored version, instead of downloading the web page again. Cache servers help reduce network and Internet traffic congestion, and save the company on bandwidth costs.