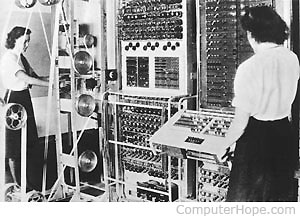 The Colossus was the first electric programmable computer used by the British during World War II. The Colossus was used as a codebreaker to decode the Lorenz cipher, giving the Allies valuable military intelligence during the war.

How was programming done on the Colossus?

To program on the Colossus computers, programmers would change how one of the hundreds of different wires were plugged into plugboards. By plugging in and unplugging the wires in different patterns, the programmers could instruct the computer on what operations to perform. These plugboards are similar to what telephone operators used to connect calls in the early days of the telephone.