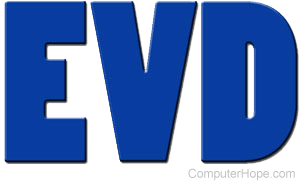 Short for enhanced versatile disc, EVD is an upcoming standard that was first announced on November 18, 2003, that wanted to replace DVDs. EVD is expected to offer five times the quality of image definition compared to DVD. Several Chinese firms plan on dropping the development of DVD players and creating EVD compliant players by 2008.

Because of other competing standards EVD is in a format war with Blu-ray and HD DVD.