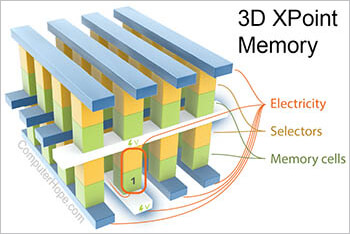 3D XPoint (pronounced "3D crosspoint") is a non-volatile memory technology developed by Intel and Micron which was introduced in July 2015. It's an improvement over traditional "planar" technologies, where memory cells are laid out in a single, flat layer. 3D XPoint memory uses two (or more) layers on top of one another that permits data to be accessed vertically and horizontally.

Also, 3D XPoint isolates individual memory cells using "selectors," which are more energy efficient than traditional transistors. It advertises 1000% greater longevity than DRAM, and 1000% increased storage density, at about 50% of the cost.