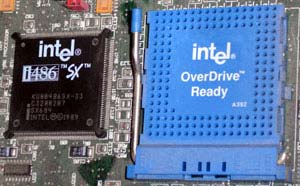 Alternatively referred to as an ODP, which is short for OverDrive Processor, OverDrive is a microprocessor created by Intel. It was first developed for 80486s, and later included in the Pentium, Pentium with MMX, and Pentium II processor families. The OverDrive chip has a clock speed of 40 MHz or less and does not include a heat sink.

The original OverDrive socket is now officially known as the Socket 1, and is a PDA socket with 169 pins.