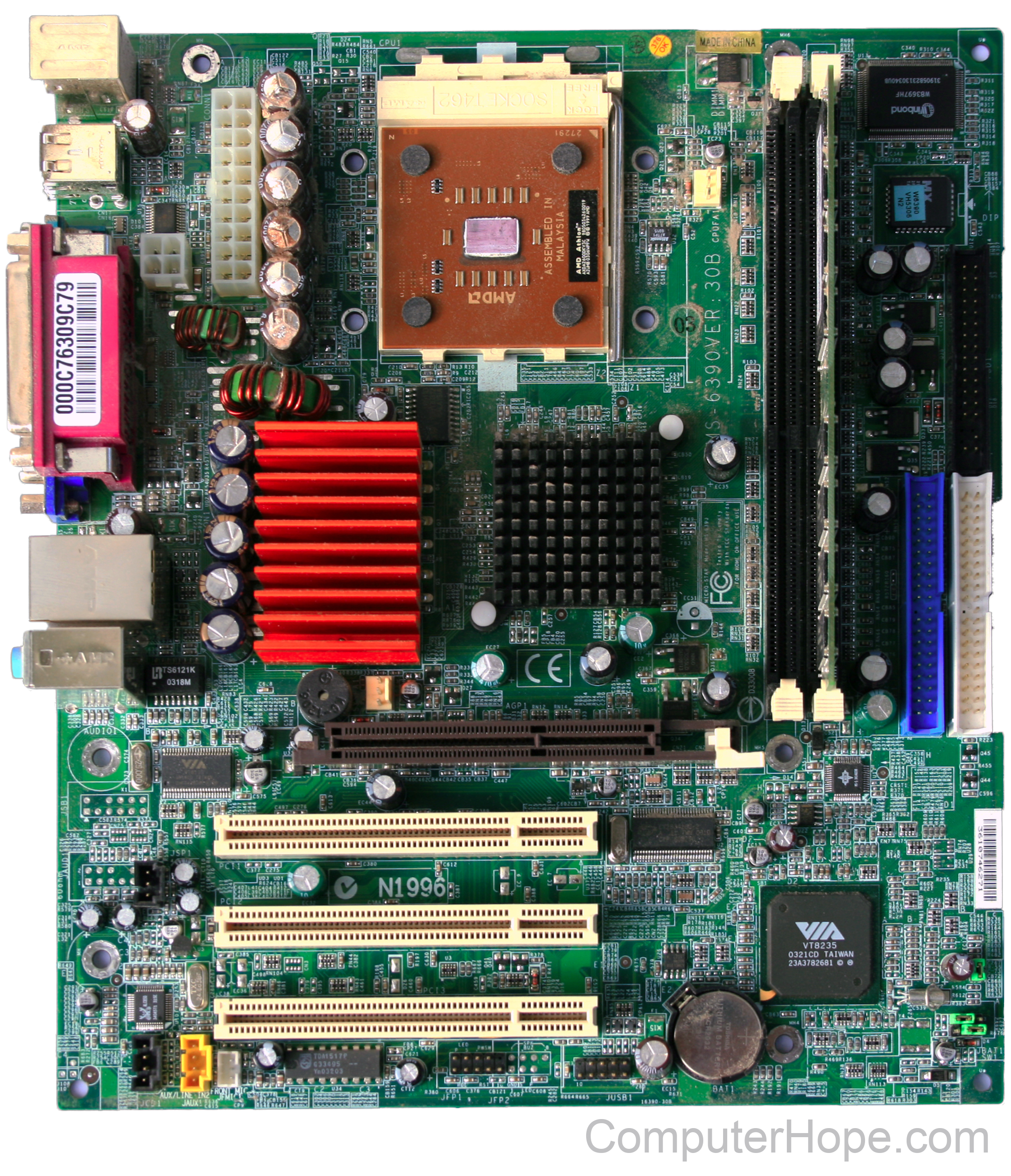 Alternatively referred to as the mb, mainboard, mboard, mobo, mobd, backplane board, base board, main circuit board, planar board, system board, or a logic board on Apple computers. The motherboard is a printed circuit board and foundation of a computer that is the biggest board in a computer chassis. It allocates power and allows communication to and between the CPU, RAM, and all other computer hardware components.

A motherboard provides connectivity between the hardware components of a computer, like the processor (CPU), memory (RAM), hard drive, and video card. There are multiple types of motherboards, designed to fit different types and sizes of computers.

Each type of motherboard is designed to work with specific types of processors and memory, so they don't work with every processor and type of memory. However, hard drives are mostly universal and work with the majority of motherboards, regardless of the type or brand.

Below is a picture of the ASUS P5AD2-E motherboard with labels next to each of its major components. Clicking the image directs you to a larger and more detailed version.

Where is the motherboard located?

A computer motherboard is located inside the computer case and is where most of the parts and computer peripherals connect. With tower computers, the motherboard is on the left or right side of the tower and is the biggest circuit board.

Below are links to pages with more details for each of the motherboard components mentioned in the previous section. The links are listed in clockwise order starting from the top-left corner of the image. Components not labeled on the image above are found in sections later on this page.

The following list contains links to components that are not shown in the picture above or were part of older computer motherboards.

As computers advanced, so have motherboards. Below is a list of the various motherboard form factors and additional information about each, including ATX, which is the most common.

How many connections, ports, or slots are on a motherboard?

There's no set standard to how many connections, ports, or expansion slots are on a motherboard. The best method of determining how many connections, ports, or slots are available for your motherboard is to look up the specifications contained in its documentation. If you've lost or discarded your motherboard's documentation, you can often download a free PDF version from the manufacturer's website.

Why are the slots and connections different colors?

The slots, ports, and connections on a motherboard may be color-coded to help identify the type of slot, port, or connector. For example, with our motherboard picture, the IDE connectors are different colors to help identify the primary and secondary connectors. When the memory slots are different colors, it indicates the memory slots are dual-channel, and pairs of memory should be installed on the same channel (color). For example, in our picture, the yellow memory slots are Channel A, and Channel B are the black slots. If you were only installing two memory sticks, you'd want to install both of them in Channel A (yellow slots) for optimal performance.

See our color-coded page for information and examples of the color of the ports on the back of the motherboard.

How does a motherboard connect to a computer case?

What was the first motherboard?

Since there is a motherboard, is there a fatherboard?

No, there is no such thing as a fatherboard when referring to a computer. However, there is such a thing as a daughterboard.

Where did the motherboard get its name?

The daughterboards we mentioned in the previous section are circuit boards that all plug into one larger central circuit board; a motherboard. The smaller boards can be thought of as the main board's "children," hence the name motherboard.

Are Dell, HP, and other OEM motherboards different?

Yes, OEM motherboards from manufacturers like Dell and HP are slightly different than other motherboards you'd find from a retailer. An OEM designs their motherboard for their needs for each model of computer. Some OEMs may even make drastic changes that go beyond the typical motherboard form factor. However, although an OEM motherboard may have it's differences, visually they often look very similar. Also, if there hasn't been too many changes, it may be possible to replace the OEM motherboard with a retail motherboard. For OEM computers with lots of differences that need replaced, you'll need a replacement from the OEM or through a third-party that sells parts from used computers.

Is there a motherboard in a laptop, smartphone, and tablet?

Yes, although the board is often referred to as a "logic board" and not a motherboard. The logic board is very similar to a motherboard and operates the same way. However, because of size requirements with most logic boards, components like the processor and RAM (in tablets and smartphones) are soldered onto the board. Also, because many of these devices have no upgrade options, there are no slots or sockets like a traditional computer motherboard.