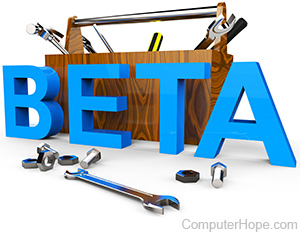 An early version of a product not yet manufactured or released is called a prototype. Prototypes allow engineers or other testers to verify a product is free of errors before it is released to the public.

Prototyping is also a verb, meaning to create a prototype. For example: "Before we develop the software, we should prototype our idea. Prototyping will help us gauge its viability before we commit vital resources to the project."