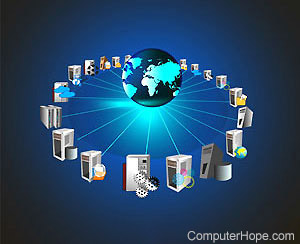 Alternatively referred to as a network topology, a topology is the physical configuration of a network that determines how the network's computers are connected. Common configurations include the bus topology, linear bus, mesh topology, ring topology, star topology, tree topology and hybrid topology. See each of these topology definitions for additional information and visual examples.