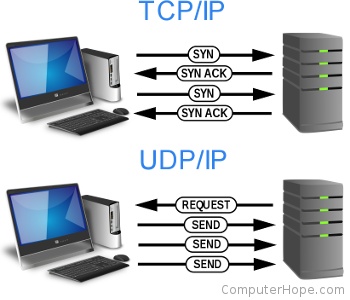 Short for User Datagram Protocol and defined in RFC 768, UDP is a network communications protocol. Also referred to as UDP/IP, it is an alternative to TCP/IP that sacrifices reliability for speed and simplicity.

Like TCP, UDP transfers packets using IP (Internet Protocol). However, it differs in what data the packets contain, and how the packets are handled by the sender and receiver.

Differences between TCP and UDP

Unlike TCP, UDP does not provide for error checking, or recovery of packets that were lost in transit.

TCP is connection-oriented. The protocol requires that a communication session is established, and that the sender and receiver agree about what data was transferred. When TCP packets are received and pass an error check, the receiver responds with an acknowledgement. If TCP packets are corrupted or lost in transit, the receiver does not send an acknowledgement, and the sender eventually re-sends those packets.

UDP is connectionless. The receiver can request and listen for UDP packets, but no session is established (there is no "beginning" or "end," data is merely sent and received). If UDP packets are corrupted or lost in transit, the receiver may not be aware of the error. The receiver does not report errors to the sender, or acknowledge that data was received.