A vector may refer to any of the following: 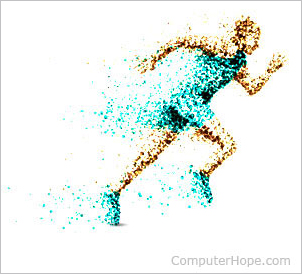 1. In computer programming, a vector is either a pointer or an array with only one dimension.

2. In mathematics, a vector is a quantity with both a magnitude and direction.

3. In computer graphics, the term vector describes a line with a starting and ending point. See our vector graphic term for further information.

4. In computer security, the term attack vector refers to a particular method for exploiting a system vulnerability.