How do I open my computer case? 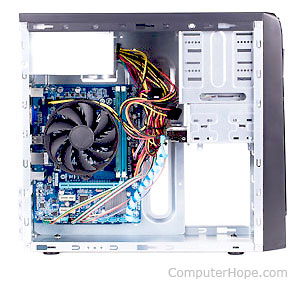 Before working inside a computer, disconnect all the cables including the power cable from the back of the computer. Also, make sure you're aware of the potential dangers of ESD (electrostatic discharge), and take precautions to prevent it.

Before opening the case, disconnect all the cables from the back of the computer and place it on a table. Next, identify the model of chassis you're using. Below is a short list of different ways a computer case cover is held in place.

The screws, buttons, or other mechanisms to open a computer case are on the back edges of a computer. If the case has screws, these need to be removed before the case cover can be removed.

Finally, some computer cases use a combination of thumbscrews and screwless mechanisms to hold the side of a computer case in place. If you only needed to remove one screw on the back of the computer, it's likely you're working with this type of case.

There are several techniques on how computer and case manufacturers develop a screwless entry chassis. Therefore, keep in mind that the steps below may not apply to your computer case.

As mentioned earlier, screwless computer cases use buttons, levers, or push arms. For example, NEC, Dell, and other major computer manufacturers often use a screwless entry case. Follow the steps below to open the type of screwless case you have.

Despite being a screwless case, some have a single thumbscrew to remove.

The levers may be located in other places, such as the bottom, back, or bottom-front of the computer case.

Screwless case with no thumbscrew

If there is no thumbscrew to remove, the case likely utilizes a button to open it.