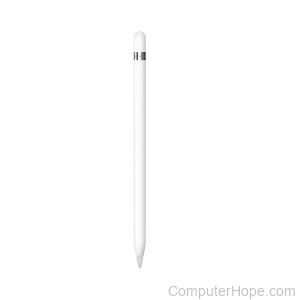 Released in 2015 as an accessory for the iPad Pro, the Apple Pencil is a wireless stylus that works on select Apple devices. It connects using Bluetooth and can be charged with a Lightning cable (1st-generation) or the magnetic connector (2nd-generation). Its pressure-sensitive tip allows the user to adjust the width and boldness of lines by varying how hard the stylus is pressed. The iPad's palm-rejection algorithms detect and ignore incidental hand-to-screen contact when the Apple Pencil is being used.

The Apple Pencil is supported by the iPad Pro, the iPad from 2018 or later, the iPad Mini, and the iPad Air from 2019 or later.