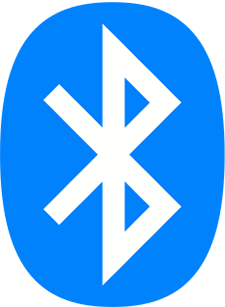 Bluetooth is a computing and telecommunications industry specification that describes how devices can communicate with each other. Bluetooth devices include computers, keyboards and mice, personal digital assistants, and smartphones.

Bluetooth is an RF technology operating at 2.4 GHz and has an effective range of 32 feet (10 meters), varying by power class, a transfer rate of 1 Mbps, and a throughput of 721 Kbps.

How is Bluetooth used? 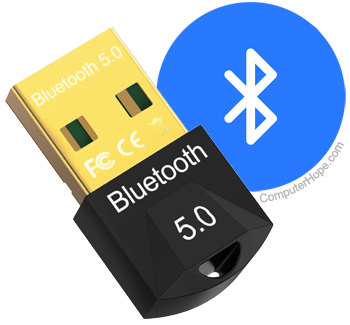 An example of how Bluetooth could be used is connecting a smartphone to a computer without wires or special connectors. The picture is an example of a USB Bluetooth adapter from SMC. This adapter could be plugged into the USB port to get Bluetooth access on a computer.

Below are some other examples of how Bluetooth is used.

What is a Bluetooth card? 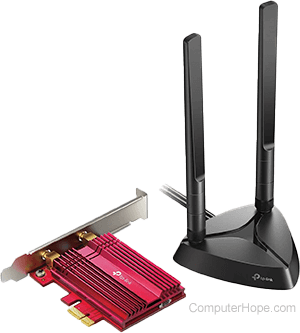 A Bluetooth card is an expansion card installed into a desktop computer to give it Bluetooth capabilities or a stronger Bluetooth signal. In the picture is an example of a PCIe Wi-Fi Card from TP-Link that allows the computer to communicate over Wi-Fi 6 and Bluetooth 5.2. In this example, the card also has antennas not connected directly to the card, which allows the antennas to be better positioned.

This Bluetooth card and similar cards can be purchased through an online retailer like Amazon.

What is the Bluetooth symbol?

The Bluetooth symbol resembles two and a half triangles pointing to the right. The symbol is a bind-rune representing "H" and "B," the initials for Harald Bluetooth, a Denmark Viking king (c. 958 - c. 970) that helped unite Denmark and Norway. It is named after Harald Bluetooth because Bluetooth was designed as a universal wireless technology for use by everyone.

Who invented Bluetooth, and when?

The answer to this question varies based on whether you consider the technology or device application as the invention date. However, the most widely-credited inventor is Jaap Haartsen, who laid the foundations for the technology that became known as Bluetooth in 1994.