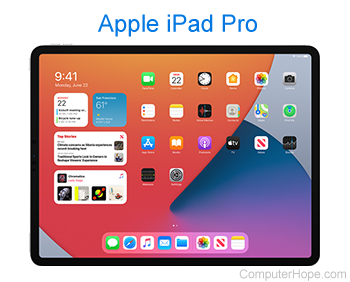 Officially announced on January 27, 2010, the Apple iPad is a tablet-style computing device, as shown in the picture. The devices have similar features and interfaces to the iPhone and iPod Touch, but applications are further optimized to run on the larger screen. iPads run a modified version of the iOS operating system called iPadOS.

Versions of the iPad

There are multiple versions of iPad products. Each version of the iPad also has multiple generations, introducing new features and specifications with each release.

Only tablets created by Apple should be referred to as an iPad. Other similar devices from ASUS, Dell, Google, HP, Microsoft, Samsung, etc. are referred to as tablets or by the name that the manufacturer has given that product. These other types of tablets are most often running a version of Android.