A batch file may refer to any of the following: 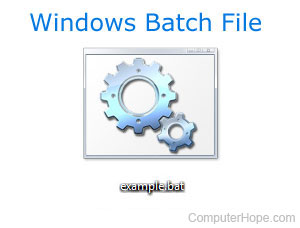 1. A batch file or batch job is a collection, or list, of commands that are processed in sequence often without requiring user input or intervention. With a computer running a Microsoft operating system such as Windows, a batch file is stored as a file with a .bat file extension. Other operating systems may define a batch job in a shell script, containing a list of commands to be executed one after the other.

For example, a batch job could be used to back up files, process log files, run several calculations or diagnostics, or any other job that require multiple commands to run. A batch job can accomplish multiple tasks without interaction from the user, freeing up the user's time for other tasks.