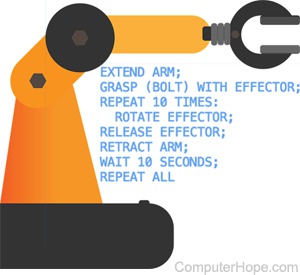 Automation is the use of technology to accomplish a task with as little human interaction as possible. In computing, automation is usually accomplished by a program, a script, or batch processing.

For example, a website operator may write a script to parse the logs of the website traffic and generate a report. If done manually by a human, this process might take hours or days. However, a computer might complete these tasks in a matter of seconds, and can be programmed to repeat them several times a day.

When should you automate?

Any task that's performed more than once should be automated, even if it's a simple task that takes a few seconds. If a task takes five seconds to complete but needs to be performed ten times a day, automation can save you over four hours a year if completing time is reduced to one second.

The answer to this question depends on the type of task you want to automate. Below is a listing of different methods and tools for automating a task from the most simple method to the more complex methods.

Computer keyboard shortcuts are a form of automation in that they allow you to complete an operating system or program task. For example, when you copy and paste text, you can duplicate text in multiple places without having to type the text.

A macro is a small segment of code created in a program to perform several commands. Although some programs allow you to record the actions you perform to create a macro, most require you to know some code or commands.

AutoHotkey is a fantastic free Microsoft Windows program that automates almost anything in Windows. Using this tool, you can automate anything done with a keyboard or mouse on a computer. The scripts the program create does require that AutoHotkey be running on the computer but also supports the ability to make self-running scripts.

For any tasks done through a command line, there are many different options available to the users. For users using the Microsoft Windows command line or MS-DOS batch files can be created to automatically perform several commands. Linux users can use any of the scripting languages mentioned below and also use cron to schedule tasks.

Several scripting languages can create scripts to automate almost any task on a computer or the Internet. These languages do require you to learn how to program but give you the most options compared to other solutions. Scripting languages include: JavaScript, Perl, PHP, and Python and require the language to be installed on the computer so that it can be interpreted.

Creating a software program to automate a task can take longer than any of the above options. However, for more complex tasks and improved speed may be the only option. To create a program, you'll need to learn how to program and a compiler to compile the program for the platform running the program.

When should you not automate?

Although automation helps with many tasks, there is still the following reason why you may not want to automate a task.

For easy to do tasks that require a human and cannot be automated (e.g., identifying what's in a picture), consider services like Amazon's Mechanical Turk.