Alternatively referred to as a bullet point, a bullet is an asterisk, black dot, circle, or another mark found before the text. Bullet lists identify key items or denote significance when order does not matter. Bullet points are often used in documents and presentations to help organize information and make it easier to read or understand.

Which programs use bulleted lists?

The following image shows the Bullets and Numbering window in Microsoft Word. 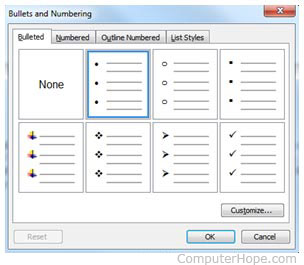 The Microsoft Word keyboard shortcut key to create a bullet is Ctrl+Shift+L.

The Google Docs keyboard shortcut key to create a bullet is Ctrl+Shift+8.