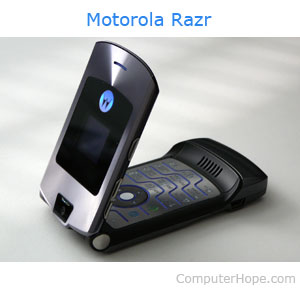 The term clamshell refers to an electronic device with a hinged cover that must be opened to be used. For example, a flip phone or flip-down phone, is a cell phone with a clamshell design, which is flipped open to access its features and interface. Some laptop computers may also be described as having a clamshell design.

On an opened flip phone, the user has access to the keypad and can view the LCD. The flip phone is held with the microphone positioned at the user's mouth and the speaker by the user's ear when open. When closed, it is compact and allows for easy storage. The picture is of a Motorola Razr, an example of a clamshell cell phone. One of the most famous clamshell computers was the Apple iBook laptop.