CRT may refer to any of the following: 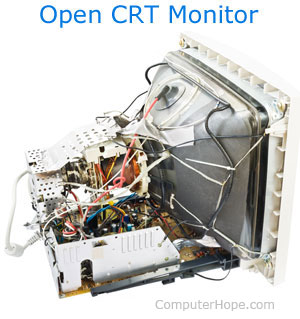 1. Short for cathode ray tube, a CRT is the electron beams in a monitor moving across your screen either interlaced or non-interlaced, hitting phosphor dots inside the glass tube. The picture is an example of the inside of a computer monitor that shows the CRT connected to the screen.

In the CRT are three electron guns: red, green, and blue. Each of these guns streams a steady flow of electrons, left to right, for each line of your monitor. As the electrons hit the phosphors on the CRT, the phosphor will glow certain intensities. As a new line begins, the guns will then begin at the left and continue right. These guns will repeat this process sometimes thousands of times until the screen is completely drawn line by line.

Once the phosphors on the CRT are hit with an electron, they only glow for a short time. Because of this, the CRT must be refreshed, which means the process will be repeated as explained above. If the video card's refresh rate is not set high enough, you may see flickers or a noticeable steady line scrolling from top to bottom of the screen.

History of the CRT

While cathode rays were first discovered in 1869 by Johann Hittorf, it wasn't until 1897 that the first CRT was invented by Ferdinand Braun. Named the "Braun tube," the first CRT used a code-cathode diode, having a phosphor coated screen.

John B. Johnson and Harry Weiner Weinhart created the first CRT to use a hot cathode, turning it into a commercial product in 1922.

2. CRT is also the name of a telnet program used to connect to other computers or network devices.