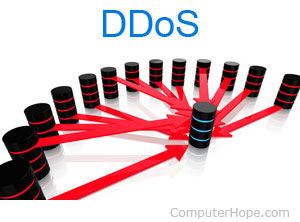 Short for Distributed Denial of Service, DDoS is a DoS attack that uses several computers to attack one victim. Often, a DDoS attack is started by hacking dozens, hundreds, or even thousands of other computers, the uploading instructions on when to attack and how. A DDoS is used against a big site capable of handling large amounts of traffic.

How can I do a DDoS?

Willingly participating or creating a DoS or DDoS is against the law and results in criminal charges. Computer Hope does not help anyone with any criminal activity.