How to hack someone or something 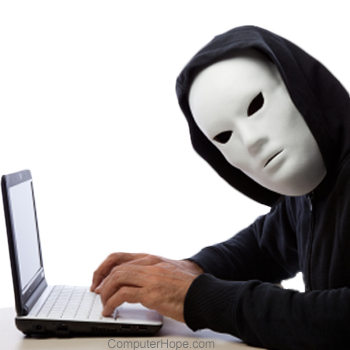 This question is often asked of us, but we do not condone hacking for illegal purposes and will not provide training or help on how to hack. While some forms of hacking are not illegal, like ethical hacking, many people want to hack for illegal reasons, known as black hat hacking. Because ethical hacking and illegal hacking involve mainly the same coding, cracking, and networking expertise, Computer Hope cannot help you with learning how to hack.

Hacking a computer to view or steal protected information does not resolve anything and only causes further issues, such as being fined or sent to prison. Instead of doing anything illegal, learn an alternative operating system (e.g., Linux), set up computer networks, read security news, and learn a programming language. If you've done this and still want to hack, try hacking your home network. That way, you don't have to worry about getting in trouble. Hacking your network helps you learn how to hack and teaches you how to defend yourself from hackers, which is a valuable skill needed by businesses. Also, we recommend taking a training course on ethical hacking to assist you in getting a computer security-related job.

Doing any of the recommendations above gives you a better understanding of computers and security than using someone else's script to break into a computer ever would.

Below are additional questions and answers that relate to hacking.

If I hack a large company, wouldn't I become famous?

Although hackers like Kevin Mitnick and John Draper (aka Cap'n Crunch) have gained notoriety from hacking in the past, most hackers are never famous. If a hacker becomes famous, it's because they're in court, going to prison, or running from the law. If you're a malicious hacker, it's more likely you would want to remain anonymous than become famous.

Apart from the solutions listed on Computer Hope for retrieving or bypassing BIOS passwords, operating system passwords, and some application passwords, we do not help anyone break passwords.

Online services, such as Facebook, Gmail, Microsoft Hotmail, Twitter, and Yahoo, have set up password recovery systems. Often, passwords can be reset or sent to you by answering a secret question or providing the e-mail address used to register the service. If you cannot recover your password using the services provided by the company, contact the company with additional suggestions or consider abandoning the online account.

I need to hack someone because they hacked or scammed me

If someone is causing you grief or harming you or your computer, report the abuse to the company handling the person's Internet connection or e-mail service. Attempting to hack the person in retaliation is likely only going to escalate your problems. It is also possible that a hacker is using an innocent person's computer to attack you. If you go after them, you're causing problems for the wrong person and not hurting the person who attacked you.

Relationships are built on trust and communication. If you believe your spouse or partner is cheating on you, confront them regarding the issue. Attempting to hack or spy on your partner loses their trust and cause a broken relationship, especially if they were not cheating.

Finally, even though you may be spying or hacking a spouse, it's still considered illegal, and if caught by your spouse or someone else, you could be convicted of a crime.

If you are blocked from particular sites or services on the Internet, it is probably for a good reason. Attempting to break or bypass those protective measures causes you additional trouble when caught. If you believe you are blocked or banned for the wrong reasons, contact the company or administrator in charge and plead your case. Computer Hope does not help bypass security measures or any blocked access.

Can I hack from any computer?

Yes, it's possible to hack another computer from any computer as long as it has network (Internet) access. You could hack from an Apple Mac computer, PC, smartphone, and even a Chromebook.

Can't I make money from hacking?

Some hackers have scammed people and companies out of money. However, when caught (and you will eventually get caught), you'll owe more than you'll ever make. You'd be a lot more successful and earn a lot more money in learning a computer skill, such as computer programming, web development, or becoming a white hat, than you would with hacking.