A die may refer to any of the following: 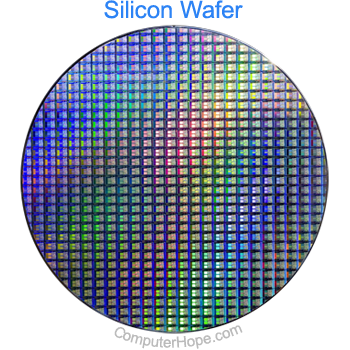 1. The die or processor die is a rectangular pattern on a wafer containing circuitry to perform a specific function. For example, the picture shows hundreds of dies on the silicon wafer. After the dies are created, the wafer is cut and made into chips.

2. The term die may also refer to a command used in scripting and programming languages to stop the script or program from running. Using the die command helps when debugging a script or can abort a script when an unknown situation occurs.

How to die in a script

In the following Perl code, if the variable $i is greater than or equal to four, the script would die. Otherwise, it would print "I didn't die!" on the screen.

This script would die because the $i variable is declared as equal to "5" in the first line. When a script dies, an error is shown indicating where the script died, as shown below.

If you'd like a script to abort without giving the line number, use an alternative command such as exit.