A line may refer to any of the following: 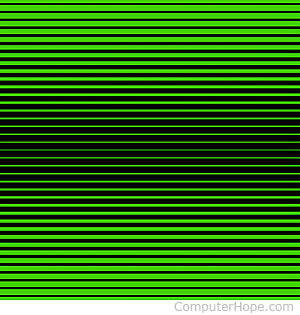 1. In communications, a line refers to a cable or wire that connects two devices.

2. Line is a free messaging app that allows you to send one-on-one and group messages to your friends and family for free and make voice and video calls. The app is available for Android, iPhone, BlackBerry, and Nokia phones.

4. In general, a line describes a connector between two points. For example, in a graphics or paint program, the line tool allows the user to draw a straight line in any direction.

5. Text with a line underneath it is called an underline.

6. In programming, a line is another name for a statement.

7. When referring to text, a line refers to one horizontal line of text.

Getting to the next line of text

Moving between lines of text

Getting to the beginning or end of a line of text

Selecting a line of text

The steps vary on how to select a line of text by what program you're using. In a text editor and word processor, you can select one line of text by clicking in the black space to the left of the line. If this method works, you can select multiple lines by clicking in the blank space and then while holding the mouse down button down drag up or down.

Other programs may support the ability to triple-click a word in the line to select the line. If the program selects the entire paragraph and not the line, this method is not supported by the program.

If the program you're using doesn't support either of these abilities, you'll need to select the line using the click-and-drag method.

Getting to a line number

When debugging an error while programming, an error may indicate what line number contains the error. For example, when attempting to run a script, you may get an error similar to the following example.

In the above example, the error message indicates the error is on line 36 and aborted on line 957. In this example, you could start troubleshooting the error by looking for typos or missing characters on line 36.

When working with a text file with thousands of lines, you can use the Ctrl+G keyboard shortcut to go to a specific line.