Dot slash may refer to any of the following: 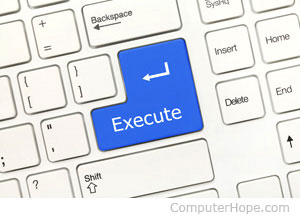 1. A dot slash is a dot followed immediately by a forward slash ( ./ ). It is used in Linux and Unix to execute a compiled program in the current directory. For example, if you had an executable file in the current directory called "hope" and typed "hope" at the command line, you would get an error, such as "-bash: hope: command not found." The error occurs because "hope" is neither a built-in command or an executable file found in your PATH environment variable.