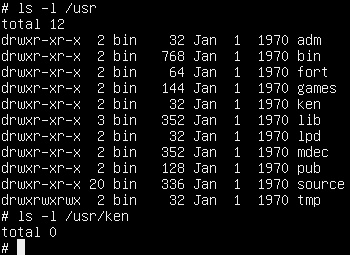 Coined by Brian Kernighan, Unix or UNIX (not an acronym) is an operating system developed by Multics team members at the Bell Laboratories starting in the late 1960s. Many of these team members also helped create the C programming language. Today, Unix is not just the work of a few programmers; organizations, institutes, and other individuals have contributed significant additions to Unix and its variants, making it a widely used and popular operating system.

Unix is primarily a command line based operating system with additional applications, such as X Window System, to give a graphic oriented operating system similar to Windows. Since Unix is often used from the command line, there are various shells. A shell is a large add-on or modification of the Unix operating system. To determine the shell, type echo $SHELL at the Unix prompt. When typing this command, a response like "/bin/csh" is displayed, which indicates you are logged in to a C shell. Bourne shell is "/bin/sh" and Korn shell is "/bin/ksh."

Is it Unix or UNIX in all caps?

When first introduced, UNIX was a trademark of Bell Laboratories (AT&T), which is now owned by The Open Group, who obtained the trademark in 1993. Today, Unix and UNIX are accepted as correct and interchangeable when referring to the operating system. However, if you are referring to the trademark, it would be more appropriate to use UNIX instead of Unix.

There are multiple Unix distributions released since its initial release. Below are a few of the distributions we have currently listed on our site.