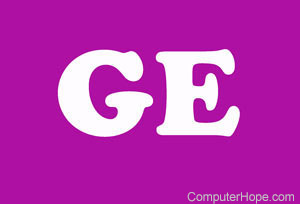 Ge may refer to any of the following:

1. Short for greater than or equal to, ge is an operator also represented as ">=" which is used in programming and in mathematics.

In the above example, if value1 is greater than or equal to value2, it would perform the operation do this. Otherwise, it would continue through the program.

2. GE is also short for General Electric, a company that was first established in 1890 by Thomas Edison as Edison General Electric. It was then officially founded on April 15, 1892. Today, GE has become a multinational conglomerate that operates in multiple industries. These include automotive, aviation, engineering, financial, gas, healthcare, oil, pharmaceutical, power, and software development.

3. The Internet domain suffix .ge is short for Georgia.