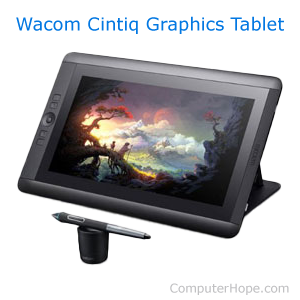 Also called a drawing tablet or a pen tablet, a graphics tablet is a natural input device that converts information from a handheld stylus. The user uses the stylus like a pen, pencil, or paintbrush, pressing its tip on the tablet surface. The device can also be used in replacement of a computer mouse. Pictured is an example of a graphics tablet and stylus, manufactured by Wacom.

The first graphics tablet for home computers was the KoalaPad. Developed by Koala Technologies in 1984, the KoalaPad was originally designed for use by the Apple II computer. However, it was eventually made available for the IBM PC compatible computer as well.

Similar to an artist drawing with a pencil and paper, a user draws on the graphics tablet with a stylus. The computer will convert the drawing strokes into digital form, displaying them on the computer screen.

The graphics tablet can also be used to capture users' signatures. This use is similar to the signature pads found at many retail stores, where you would write your signature after using a credit card to make a purchase.

Below is a list of professions and people who are more likely to use a graphics tablet.