A video format that allows a video with a different aspect ratio to show on a display that does not support that aspect ratio. Commonly used with DVD videos to show the movie as it was originally intended to be viewed and not modified to fit your television screen. A DVD with this display will mention it's viewed in widescreen format. Some DVDs support both widescreen and fullscreen format, allowing the viewer to decide how they want to view it. Unless the DVD supports fullscreen format, it is only going to be viewable in widescreen.

Below is an example of what a letterbox may look like on a display. As shown below, a letterbox is distinguishable by the horizontal black bars along the bottom and top of the image. 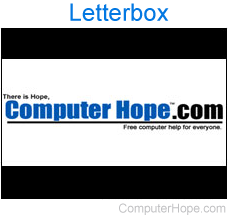