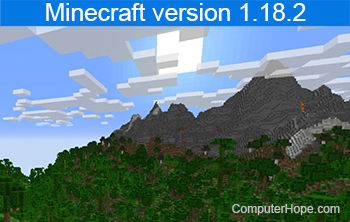 Minecraft is a Java computer video game created by Markus Persson and inspired by the Infiniminer, Dwarf Fortress, and Dungeon Keeper games. Minecraft was publicly released on May 17, 2009, and by January 2011, it sold one million units in less than a month while still in Beta. As of November 2011, it had sold over four million units.

In Minecraft, a player can build anything imaginable using blocks in a three-dimensional, procedurally-generated environment. Blocks of sand, dirt, cobblestone, gold, gravel, sandstone, water, and other materials are available for building. If it's not yet available, because of the game's open nature and vast community, it's likely to be created.

Players around the world can design custom worlds, design their character, and customize the game play to their liking. The player has the option to play in a creative mode, survival mode, or play online with other Minecraft players. In creative mode, the player can build anything they want without having to worry about tools or mining resources. In survival mode, the player needs to learn to build tools, fire, shelter, and weapons to defend themselves against predators such as zombies, spiders, and skeletons.

Regardless of what mode you decide to play, Minecraft is either a simple or very complex game depending on the players preferences. From gigantic builds such as the Star Trek Voyager spacecraft built to scale, to the quaint cobblestone village with stone walkways this virtual Lego Land has something for everyone. Make a theme park with roller coasters, have a pet wolf, ride a boat, or dig a secret tunnel beneath your fortress. Anything is possible in the Minecraft world.

On September 15, 2014, Microsoft announced it had purchased Mojang, the makers of Minecraft, for $2.5 billion.