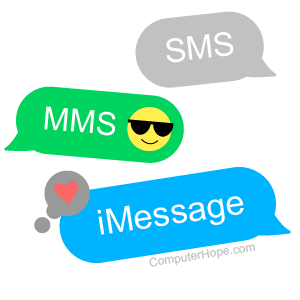 Short for Multimedia Message Service, MMS is a messaging system capable of distributing text messages with graphics, sounds, and videos over WAP (Wireless Application Protocol). It is a texting standard that replaced SMS, which had a short limit of about 160 characters, and did not allow multimedia attachments.

MMS was invented in 1984 and supported by cell phones starting in 2002 with the release of the Sony Ericsson T68i. It was built on the existing SMS infrastructure. Since then, all major mobile operating systems have included MMS support. Even modern iPhones, which use their proprietary iMessage service, support MMS for texting smartphones from other manufacturers.