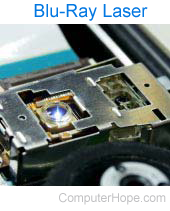 Alternatively called a disc drive, optical media, optical storage, and Optical disc drive, an optical disc is any media read using a laser assembly. The most common types of optical media are Blu-ray, CDs, and DVDs. Computers can read and write to CDs and DVDs using a CD writer or DVD writer drive, and a Blu-ray is read with a Blu-ray drive. Drives such as a CD-R and DVD-R drives that read and write information to discs are known as MO (magneto-optic).

Because these discs are read by light (optical), they should be called optical discs, not optical disks.

What optical disc can hold the most?

Blu-ray discs can hold the most and can hold up to 50 GB of data. BD-R (Blu-ray recordable) are available in sizes as either 25 GB or 50 GB.

Why is optical media not as popular today?