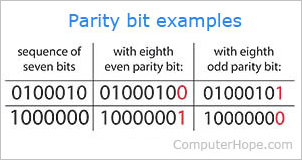 A parity bit, also known as a check bit, is a single bit that can be appended to a binary string. It is set to either 1 or 0 to make the total number of 1-bits either even ("even parity") or odd ("odd parity").

The purpose of a parity bit is to provide a simple way to check for errors later. When data is stored or transferred electronically, it's not uncommon for bits to "flip" — change from a 1 to a 0, or vice versa. Parity checks can detect these errors. For example, to check a binary sequence with even parity, the total number of ones can be counted. If the number of ones is not even, an error is likely to have occurred.

The inherent weakness in this type of error checking is that it can only detect an odd number of errors in the sequence. If an even number of bits are flipped, a parity check will not catch it.