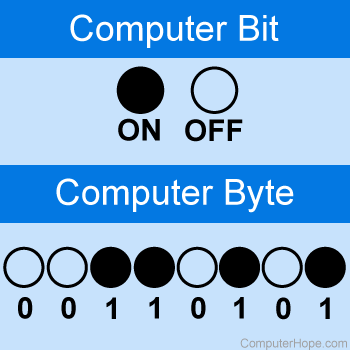 Because all information (even a single character) is larger than a bit; a byte is the smallest unit of measurement to measure a file.

What comes before a bit?

A bit is the smallest unit of computer measurement, which means nothing comes before a bit.

What comes after a bit?

A nibble comes after a bit. However, it's more common for a nibble to be skipped and for a byte to come after a bit.

Bits in a computer processor

With colors, the bit color depth is calculated by 2 to the power of the bit color. In other words, an 8-bit color would be 2^8, which is 256 colors.

Bit vs. other data measurements

Below is a listing of byte values in comparison to other units of measurements. Using this chart, you can find how many bits are in other measurements. For example, you can see that there are 8 bits in a byte.

A bit is an acronym, shouldn't it be written in all uppercase?

Although "bit" is an acronym, it can be written in all uppercase like most acronyms or as all lowercase. When deciding what style to use for your writing, make sure to remain consistent. Like most style guides, Computer Hope chooses to write "bit" in all lowercase.

How do quantum computers use a bit?

Unlike today's computer, a quantum computer bit can be 1, 0, or both 1 and 0 at the same time. This type of bit is known as a qubit.