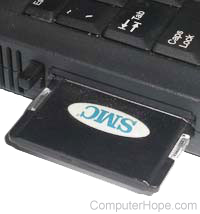 Short for Personal Computer Memory Card International Association, PCMCIA is a trade association founded in 1989 that is responsible for the ongoing development of the PCMCIA standard. PCMCIA cards are hardware interfaces that are slightly bigger than a standard credit card and enable additional functionality for laptop computers and portable devices.

The term PC Card replaces PCMCIA card because of the ongoing changes in the technology and because it's easier to remember. It also should not be confused with a PCI card, which is used in desktop computers.

PCMCIA is also jokingly the backronym "people can't memorize computer industry acronyms" because of how many different computer acronyms there are.

Today, PC Card has replaced by the new ExpressCard standard and most new laptops no longer have or use PC Cards.