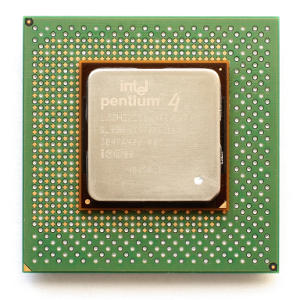 First released on November 20, 2000, the Pentium 4 is a line of computer processors developed and manufactured by Intel. They were single core processors originally based on an architecture code-named Willamette and were used in desktop and laptop computers until the late 2000s. These processors were the successor to the Pentium III line; their development began about two years earlier, when the Pentium II was Intel's flagship consumer processor.

The first Pentium 4 processor cores were capable of speeds from 1. 3 to 2 GHz. They utilized a 180 nm fabrication process and was the first CPU to use the NetBurst microarchitecture, employing Intel's Hyper Pipelined and Rapid Execution Engine technologies. To use this processor, a motherboard was required to have a Socket 423 CPU socket. Future versions of the Pentium 4 processor included the Northwood and Prescott, using different CPU sockets like Socket 478 and LGA 775.