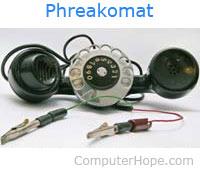 Phreak is a slang term for hacking telephone networks and devices. It's a verb, as in "to phreak," or "phreaking." A person who phreaks is identified as a "phreak" or "phreaker." The word combines the words "freak" (meaning "aberration," or "enthusiast") and "phone."

In an attempt to help identify phreakers, in 1964 AT&T started monitoring phone calls. This monitoring is believed to be the first known occurrence of corporate monitoring of customer telephone activity. AT&T's monitoring was a success, and led to several successful prosecutions, and a drop in phreaking. One of the most well-known phreakers is John Draper aka Captain Crunch.

The act of manipulating telecommunications continues today, but the traditional identity of a phreak is no longer the same. It was diluted by the creation of the Internet, and the transition from analog to digital telephony.