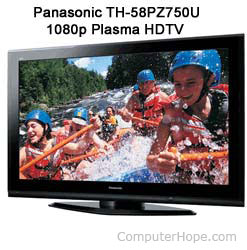 TV may refer to any of the following:

1. Short for television, a TV or telly is an electronics device that receives a visual and audio signal and plays it for the viewer. There is a debate over who is credited as being the inventor of the TV. The two candidates are Vladimir Zworykin, a Russian-born American who worked for Westinghouse, and Philo Taylor Farnsworth, a boy in Beaver City, Utah. Vladimir held the patent for the TV, but it was Farnsworth who was the first person to successfully transmit a TV signal on September 7, 1927. The picture shows the Panasonic TH-58PZ750U, an example of a television.

2. The Internet domain suffix .tv is short for Tuvalu.