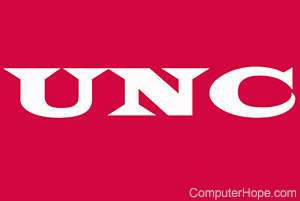 Short for Uniform Naming Convention or Universal Naming Convention, UNC is the standard for naming and accessing a network resource such as a network drive, printer, or server. For example, in MS-DOS and Microsoft Windows, a user would access a shared resource by typing or mapping to a share name similar to the example below.

However, in Unix and Linux you would use forward slashes instead of backslashes. Below is an example of a Unix UNC name.